Orange Juice And Gasoline — Can Business And Religion Mix?

Napalm is made when you mix equal parts of gasoline and frozen orange juice. And the results are catastrophically explosive. But that’s not the only mixture that can be explosive. Mixing business and religion can be as controversial and explosive as mixing politics and —well— anything. The recent past election in America (and on-going repercussions) are a perfect example. Social media is growing with more opinions daily and has become the megaphone for every opposing force. And a platform for almost brutal arguments that can never possibly be won by either side. This creates a situation where people feel compelled, even if they don’t intend to, to “choose a side”.

It’s apparent that many people on social media today have a difficult time scrolling on by and ignoring posts or opinions they don’t agree with. They must take to the keyboard with a ferocious tenacity. We all know how these exchanges wind up. People shouting insults at each other.

Even on our social posts for TeleworkPH, we get negative comments. People expressing their opinions about our operations and services, without any factual knowledge or exploration of how much offshore outsourcing can help Western countries. Bill W., founder of Alcoholics Anonymous, put it beautifully when he called these types of comments“contempt prior to investigation.”

Social Media — Where Everyone Knows Your Name

Now that over 51% of the world’s population is on some form of social media, it has also become the perfect place for people to promote their brand or business. LinkedIn, of course, is the leading business platform where people from several different backgrounds come together and share ideas, struggles, wins, and advice. But would you be comfortable sharing your religious beliefs on LinkedIn? How about while promoting your services on Facebook?

There seem to be very few entrepreneurs left who maintain a private Facebook or Twitter account where their business doesn’t leak into. This can be especially true for business owners who brand themselves. So what outlet would they have to express what they hold dear to their heart?

Posting biblical quotes doesn’t always gather as much engagement or attention as say, a quote from Confucius or Abraham Lincoln. Even Elon Musk. However Bible quotes seem to be at least more acceptable than say, something from the Bhagavad-gita. But there again, what is the target market? How will they respond to this?

Now take a look at your own behaviors. Would you stop doing business with someone or stop using a brand because you find out they are a different faith than yours? It could be argued that it would depend on the nature of the business. Furthermore, what needs to be kept in mind that patronizing a brand or business doesn’t always mean supporting another faith or religion.

So Is It OK To Mix Business And Religion?

It’s an interesting question. Certainly every entrepreneur who may be highly invested in their faith and religion will construct their business practices around their specific belief system. And basing these practices on a certain code of ethics can serve to be quite beneficial. However, would you start a meeting with a potential client or customer with a prayer? Or reverse that. Would you be comfortable if you were on the receiving end of that situation? How about in your own company even? Beginning functions, say an awards recognition dinner, with a prayer based on your religion and expecting everyone in your company to engage may cause issues.

Perhaps me even bringing this up may be considered taboo.

Many respectfully vow to “live and let live”. They abide by the saying “I respect all religions, as long as they don’t try to force it on me”. That’s a fair point. So, by that rationale, there is a fine line between happily expressing our dedication to our faith and cornering someone to get them to listen to our religious manifesto. What we have to understand is there’s a difference between an invitation and hijacking someone’s time. Also, we need to consider that when someone is approached in a forceful manner to listen to or engage with a faith that’s not their own, they feel a certain betrayal to their own beliefs.

Most Brands Rely On The Market As A Whole

Mixing business and religion may not be an issue for many localized businesses with a smaller target area. Companies that serve only a limited community will most likely not suffer devastating consequences as much as global brands if they mix religion and business. For instance, it’s common for shops and businesses in India to have a puja altar dedicated to Ganesha, the remover of obstacles. In Japan, you may find many images of the Buddha adorning the offices of local business leaders.

However on a global level, especially when it comes to social media marketing, people have become more aware. And with the onslaught of opinions that social media has opened the door to, a lot of the public remains forever on the defensive. Unfortunately, there are those who seek out to be offended. There’s even been backlash from advertisements or pictures posted on social media from brands where the person in the picture may be wearing a cross necklace. One may think that this could be going too far. Perhaps it is, but it is something brands need to be aware of and sensitive to.

What is meant by being sensitive to these situations? It’s understanding that people see things differently no matter how benign we may think something is. We have to have empathy and take into consideration that what offends one group may seem insignificant to another. As business leaders, we have two choices, to listen and respond or react and recoil. It becomes necessary sometimes to set aside ego-driven emotions and remain neutral if a company wishes to attract global business.

Now on the flip side of the coin, there are companies that simply thrive while unabashedly promoting their religion or beliefs. They ignore the above mentioned backlash and move forward despite any controversy. It seems to work for them, however much they are limiting their market by doing so. Or are they?

Observance Is Not Always Forcing Business And Religion To Mix

Every year for the last dozen years or so, the end of the year holiday season becomes a battleground. Yes, war is declared by and against those who wish to use expressions like “Merry Christmas” or “Happy Hanukkah”  or “Happy Kwanzaa”. Some view using these greetings as offensive. The more neutral “Seasons Greetings “ or “Happy Holidays” has been adopted. Yet even then, some people find this offensive.

Sometimes as a business leader it seems you can’t win for losing.

Observance of holidays by businesses shouldn’t be viewed as an attempt to convert the general public. Global businesses especially need to understand the myriad of different cultures connected by the internet. In Malaysia, for instance, where a majority of the population is Muslim, many businesses close down for the entire month of Ramadan. Here in the Philippines, Holy Week, or the week before Easter Sunday, is sacred and many businesses close to give their employees time to travel to the province and visit with family. But this doesn’t mean they expect their entire customer base to do the same. They are just following the specific set of beliefs as dictated by their culture and faith.

This blog post was not intended to take either side of the issue, The goal was to merely point out both sides for simple awareness. In TeleworkPH and all across the nation of the Philippines, all world religions are represented. Yes, there is the majority, but overall, Filipinos are more than tolerant of each other’s beliefs. In the Philippines, they embrace their diversity while still remaining a culture and people of strong faith. Together they celebrate Christian, Muslim, and even some Hindu holidays.

So what are your views on the topic? 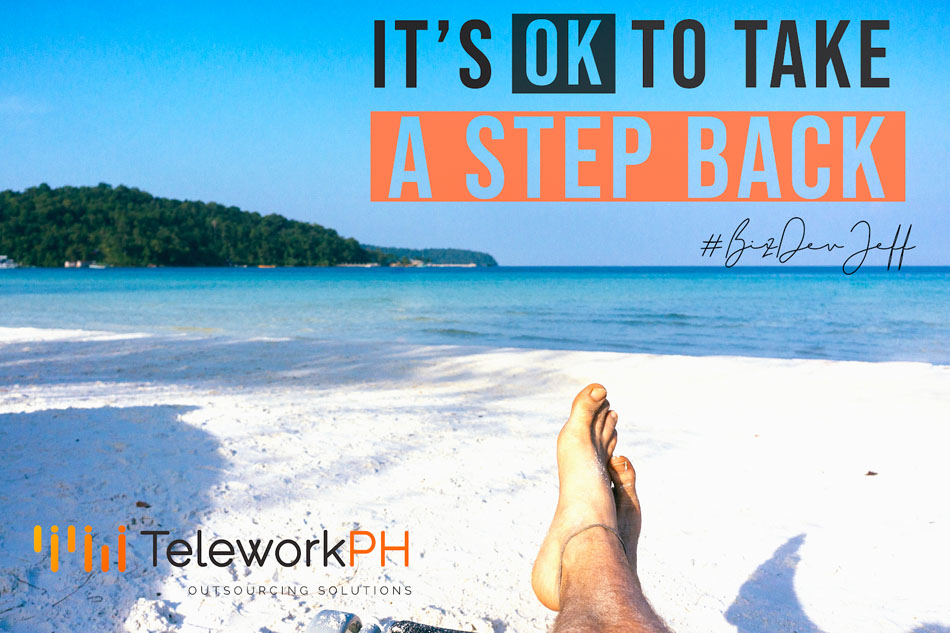 It’s Really OK To Take A Step Back